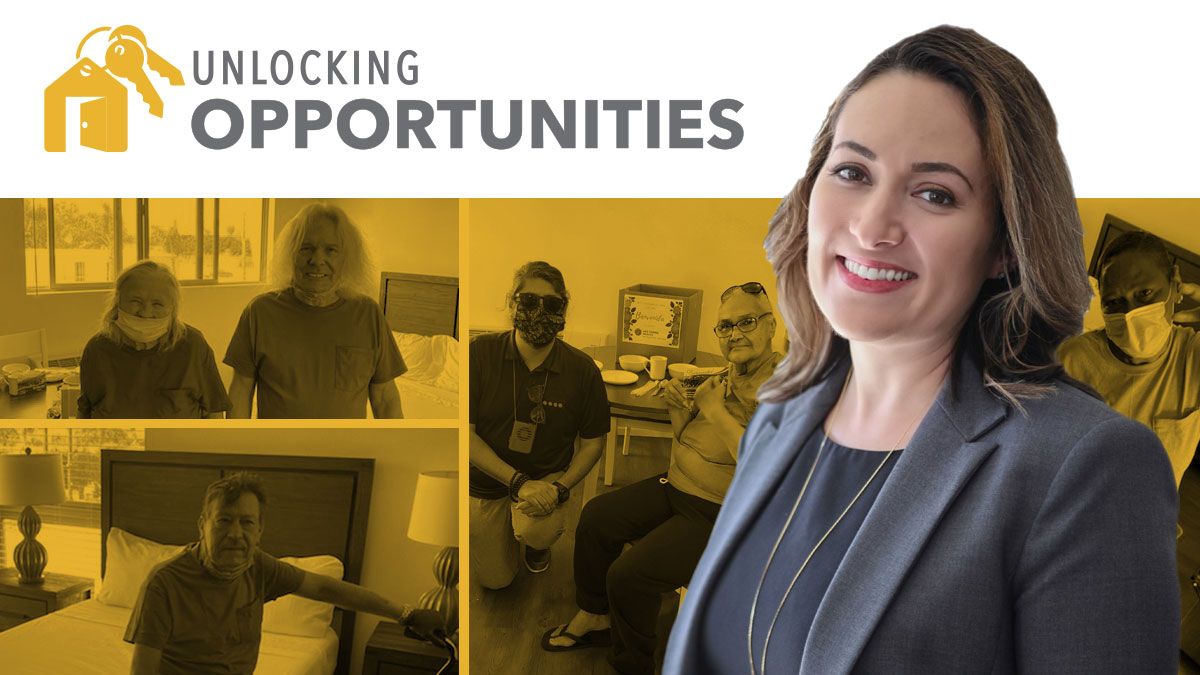 National CORE currently has 199 apartment homes set aside for vulnerable populations and another 188 under construction. As National CORE continues to expand its portfolio, it remains committed to providing permanent supportive housing for the most vulnerable in our communities.

With a growing number of residents with additional needs, Hope through Housing is proud to introduce AJ Galka-Gonyeau, our first Director of Permanent Supportive Housing (PSH) and Residential Services. In her role, she will help strengthen and grow capacity to serve special populations, including formerly homeless individuals and families, veterans, adults with developmental disabilities, and youth transitioning out of foster care. AJ brings more than a decade of experience working with vulnerable populations.

AJ has established herself in the PSH field as an innovative and compassionate leader, having worked for numerous nonprofits and agencies. Having served in various leadership roles in several organizations, she is proud to join the team at Hope through Housing, an organization whose mission is in alignment with her personal beliefs and who has been at the forefront of resident services for years.

As part of Hope through Housing’s continued commitment to providing stability and independence for formerly homeless residents and other special populations, we have recently launched our Unlocking Opportunities initiative. AJ will lead this initiative, applying her knowledge and best practices to focus on individual care, honoring personal choice, and implementing proven models for recovery, resiliency, and overall well-being.

“If we can help our residents open the door to opportunities, we can offer hope, and in the process change their lives forever,” AJ says.

What sets Hope through Housing apart from other social services nonprofits, according to AJ, is the unparalleled opportunities created by the vertical integration of divisions within National CORE, whose in-house capabilities include development, construction, property management, and social service programs (Hope through Housing). The collaboration between divisions and co-workers fosters a much smoother development process, driven by a mission focus, creating strong healthy communities that provide residents with a good quality of life.

“Hope through Housing has such a great foundation for individual transformation,” AJ said. “Building the PSH on top of what exists is really just enhancing the great work that is already being done.”

National CORE’s Marv’s Place was the first permanent supportive housing community in Pasadena specifically designed for formerly homeless families. When it opened in January 2017, Jessica, Joel, and their two young children were among the first families to move in. Before Marv’s Place, the family was among the nearly 60,000 people in Los Angeles County who experience homelessness on a given night. Four years later, Jessica and Joel have stabilized their lives and finances and watched their close-knit community of neighbors do the same.

“Everybody in the first year was going through a lot of emotional stress, trying to get themselves back into reality, because it was a fight to not be homeless. Then in the second year, people were still going through the healing process,” Jessica said. “The third year, we started seeing more like, ‘ok, what do we need to do for ourselves?’ This place is built with such a purpose, and that is to help people excel and move on.”

In early 2015, the family moved across the country to take care of Jessica’s aging mother. After a few months, her mother’s dementia and unpredictable behavior made it an unsafe place for them and their young children to live. Needing to immediately relocate, the family started living in hotels, with most of their belongings in storage. The months stretched on and their saving disappeared as they desperately searched for housing.

“Everywhere we would go, we already were tainted by being homeless,” Jessica said. “Even though we didn’t look a certain way – our credit was okay, my husband was working – just because we were homeless, a lot of people turned us down.”

After the family had been without a home for nearly a year and a half, two homeless services organizations informed them that National CORE had an apartment home for them in Marv’s Place. Jessica said, “coming here has been the biggest blessing ever, because when you’re in that rabbit hole, and you don’t see the light, it gets scary.”

After stabilizing their own lives, Jessica and Joel have helped other families get housed, with Jessica working as a fundraiser for one of the homeless services nonprofits that helped connect them to housing, and Joel serving on the other organization’s board. They have even started their own nonprofit to give holiday gifts to families in need. After years of hard work, they are now in the market to buy a home, looking at options including National CORE’s new community of single-family homes, Collett Crossings in Riverside.

“When you can have a place to call home, it’s like you finally have your feet back on the ground, and National CORE gave us that,” Jessica said. “Having this ground here, we were able to rebuild what was once broken.”

Miguel is a freshman aerospace engineering student at UC San Diego (UCSD), studying to be a rocket scientist. Since he was in elementary school, Miguel has been fascinated by space travel and he dreams of one day working for NASA’s Jet Propulsion Laboratory. Last year, Miguel was one of 16 high school graduates and adult learners to receive a Building Bright Futures scholarship, an initiative championed by the Women of Hope.

Miguel’s early interest in space exploration led to a love for all things math-related, which drove him to excel in school. In 2010, he moved into National’s CORE’s River Canyon Apartments in Cathedral City with his mother and sister. Just before moving, his family’s house had been broken into and burglarized. Miguel said moving into a safe, gated community has “been a huge relief on my mom’s shoulders, just knowing that we’re safe,” and it has also given Miguel the peace and quiet to focus on his studies. The ability to walk to his high school made it easier for Miguel to access his education. After graduating, Miguel completed his prerequisites at a local community college, as he prepared to transfer to UCSD.

Then the pandemic hit.

After receiving notification that he was accepted at UCSD, Miguel had been looking forward to living on campus and experiencing college life. Instead, he was living at home, studying rocket science online, adjusting to distance learning like hundreds of thousands of students across the nation. In the beginning, he found it overwhelming. Due to his unstable internet connection, his classes would freeze, interrupting his lectures. This was especially challenging for his more complicated engineering classes. He would find that once he reconnected, oftentimes the whiteboard would be filled with complex new equations and he had no context to understand their meaning.

With the scholarship funding he received from Hope through Housing, Miguel was able to upgrade his internet so he could seamlessly access all his classes. To further create an environment conducive for being on long Zoom calls and studying, Miguel purchased a comfortable study chair, replacing the folding desk chair he had outgrown, and other items to complete his home “classroom.” Thanks to the support of his family, friends, and community, Miguel has finished his first year of studies strong, receiving straight A’s for his efforts.

Beauty Bubbles & Bites is Back!

Women of Hope and the Hope through Housing Foundation are excited to announce the return of this exclusive fun-raising event scheduled on Thursday, July 15!  This year, Beauty, Bubble & Bites will be held at Haven City Market in Rancho Cucamonga, featuring the latest in beauty and self-care, a signature drink, tasty bites, and a beauty/accessory auction. All proceeds benefit Hope through Housing’s Building Bright Futures Fund, helping local youth in our community to succeed in school and life.

To view our unique sponsorship opportunities or to purchase your tickets, please visit https://WOHBBB.givesmart.com, but hurry – we expect another sold-out event! You also can support the event by donating items for the silent auction and opportunity drawing. For more information, please contact Alyssa Cotter at acotter@hthf.org.

Join Hope through Housing’s mailing list to receive the latest news, community updates, information on upcoming events and much more!

we are making a difference in the lives of children, families and seniors living in poverty. Together, we transform lives and communities.