Finding Housing after 15 Years on the Streets 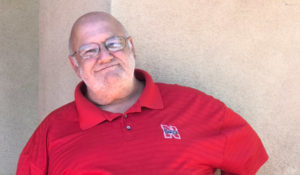 Richard Porras looks back on the most difficult point of his life and sees it as a blessing.

“I found out that more people out there care than don’t care. Homelessness took the negativity away from me,” he says in a voice slowed by years of drug abuse and living on the streets.

Today, Richard lives at the Fountains at Sierra, a 55-and-older community in Fontana, California. There he has found a support network of residents and property management who make him feel at home and connected – and have helped him stay clean and sober for the past decade.

A veteran with three years of service in the Navy, he admits to having made “some really bad choices” after his time in the military. That led him to 15 years on the streets and a life that nearly killed him. Losing his girlfriend to cancer, on top of his own health issues, helped lead him to the Fountains.

“I had open heart surgery three years ago, but my life here has been good. I have a roof, I can take showers. I love it here,” he says.
Even so, Richard can’t help but look back.

“I don’t resent my homelessness,” he says. “When you’re out there and need help, you can find it.”