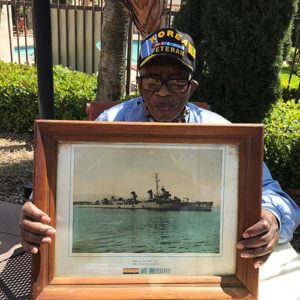 At Hope through Housing, it is our privilege to serve our nation’s veterans. The richness of their history and the stories that they share always amaze us. I recently had the honor of meeting Sam, 88, a Korean War Veteran at the Gardens at Sierra in Fontana where he has been a resident for more than eight years. As we sit down to talk in the courtyard, his eyes are shaded from the sun by the Korea Veteran cap that he always wears, as his calloused hands hold a framed picture of the USS Radford, the Navy destroyer on which he once served.

As he starts to talk, he looks at the photo, and he remembers that 1953 morning near the end of the war, when he shot upright in his lower deck bunk, awoken by a blaring alarm and a loudspeaker booming, “All hands, man your battle stations! This is not a drill!” This was Sam’s third and final battle of the war. He remembers the blur of adrenaline and action. The ship being bombarded by gunfire as he rushed from deck to deck, transporting ammunition. He looks upon the nearby pool, takes a deep breath, and visibly relaxes, commenting that at Gardens at Sierra he has found a supportive community, unlike anything he has experienced since his days in the Navy.

Born in 1933, Sam grew up in Greenwood, Mississippi. He spent his childhood helping his family with fieldwork, sharecropping corn, peas, watermelon, and cotton. To earn extra money, he also helped his father with drywalling and construction. Despite the labor-intensive manual work, his family recognized the importance of education. Sam and all of his eight younger siblings had college aspirations. As the oldest, Sam joined the Navy, so he could help pay for their education. Because of his service, all eight of his siblings are college graduates.

Joining the Navy as a black man in 1951 was not easy. However, Sam persevered, passing test after test, becoming one of a handful of recruits to be deployed to Korea. During his service, Sam earned three battle stars and advanced rank to a First-Class Seaman.

After returning home, he finished his college education and began looking for a job, but soon found that there were not a lot of opportunities available to him. He tried his hand at farming, he worked as a truck driver, and then he found stability working for a cafeteria, where he advanced to head of maintenance. In time, he found himself in Los Angeles, where he met the love of his life, Betty Jean. Together they moved to Victorville where housing was less expensive.

With all the adversity that Sam had faced in his life, none of it had prepared him for the day when a doctor told him that his beautiful wife only had one day to live unless she underwent daily dialysis. The nearest treatment center was more than 40 miles away. There was nothing Sam would not do for his wife, so to make it easier for her, he started looking for housing near the treatment center.

Sam says it was a lifesaver when he found out there was an apartment available at Plaza at Sierra. The team at Hope through Housing was always there to assist, from connecting Sam and his wife to free transportation to Betty Jean’s treatments to providing a helping hand when needed.

For almost a decade, Sam and his wife thrived. Knowing that she was living on borrowed time, Betty Jean enjoyed life to the fullest and was a favorite of the other residents. When Betty Jean passed away, the team at National CORE and Hope through Housing helped Sam move his belongings to a new apartment at Plaza at Sierra.

Sam pauses as Lyndra Roman, the services coordinator for the Fontanas, walks up to us to say hello. I can tell from their conversation that the strong bond between Sam and Lynda is something special.

“This is the right place to be,” Sam comments, as he leans back in his chair.

As we talk, Sam takes a call from his best friend and former Navy shipmate, Bill. Next year, they hope to together attend their first ever Navy reunion. But for now, Sam puts down the phone and the memorabilia, leans back into his chair, and reflects on a full and fulfilling life.